I can't believe it's Christmas Eve!!!!
Happy Holidays Everyone! We hope they are healthy and filled with lots of LOVE!! 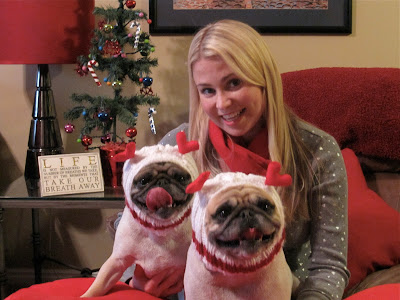 Email ThisBlogThis!Share to TwitterShare to FacebookShare to Pinterest
Labels: Holidays

Last night I had my book club Christmas party, Ryan was in charge of giving a toast before we got started. He found a great toast that we all wanted emailed to us today.  Its such a great toast, I think we should all follow this for the holiday season and throughout 2011.

This Christmas, mend a quarrel. Seek out a forgotten friend. Dismiss suspicion and replace it with trust. Write a letter. Give a soft answer. Encourage youth. Manifest your loyalty in word and deed. Keep a promise. Forgo a grudge. Forgive an enemy. Apologize. Try to understand. Examine your demands on others. Think first of someone else. Be kind. Be gentle. Laugh a little more. Express your gratitude. Welcome a stranger. Gladden the heart of a child. Take pleasure in the beauty and wonder of the earth. Speak your love and then speak it again.
How great is that?!?! It pretty much sums up everything I truly believe. Please share with others.... Xo
Posted by Somer Love at Wednesday, December 15, 2010 8 comments:

Email ThisBlogThis!Share to TwitterShare to FacebookShare to Pinterest
Labels: Holidays

On the Third day of Christmas!

So if you are a Cystic Life member then you have had the pleasure of reading the 12 days of Christmas posts that some CF warriors are posting. I was honored that Ronnie asked me to post.
If you are not a member of Cystic Life... I am not sure what you are waiting for, DO IT!!
My post was the 3rd day this is what I wrote...

Is it just me or are the years getting shorter and shorter? Or is it that they are just starting the Christmas cheer earlier and earlier? Don’t get me wrong I love the holidays as much as the next person. But what I can’t stop thinking about is that with the Holiday cheer comes the ever so dreaded flu and cold season.

I guess I should introduce myself for those of you that don’t know me. My name is Somer Love. I try to live each day to the fullest by keeping my hope high and dreams big!! I am a 31-year-old adult living with Cystic Fibrosis, and I am an active advocate in the CF community. I make it a priority to raise awareness and help educate everyone on CF. Being diagnosed at 11 months old I was unable to make my own decisions. However, I am fortunate enough to have fabulous parents who chose to help fight my disease. When I was old enough I adopted my parents philosophy and joined the fight. I have a blog and update it often. Come join my fight over at LovetoBreathe.com

I am so thankful for the opportunity to be a part of this newsletter. I want to share with you some tips that I do daily to rid my body of any airborne ailment that may have found its way in despite my best efforts. I do these all daily and swear by them:


1. Of course we all know the power of clean hands. Use soap and water when you can and when that isn’t available then a little hand sanitizer goes a long way. I have that stuff everywhere; coat pockets, handbags, car, every room in the house…. You get the picture.

2. At the end of every day, I gargle with hot salt water, and I also do a sinus rinse. This prevents any bug from proliferating and settling in.

3. Drinking hot liquids can also knock any germs loose and send them down into your stomach where they cannot survive.

4. Try not to touch your face. If you have an itch use the inside of your shirt or sweatshirt, that’s what I do.

5. And last, but not least, some say dogs are a man’s best friend and trust me its true. I love my babies! However, during flu and cold season vitamins are also man’s best friends. You can get Vitamins through supplements or vitamin-rich foods, like fruit and veggies. So stock up and eat healthy.

Wishing you all a HAPPY and VERY HEALTHY Holiday season!

Out but not out and about

Well I got out last thurs from the joint, I knew it was coming... So I went in, and was on a new floor entirely this time. Since the last time I was in the hospital the hospital had moved the CF wing. So I wasn't sure what to expect. The first day I got there I was in a temporary room until a patient was discharged from the princess room ;) Well thats my kind of room... they must of heard about me ;)

So the theme this year was Thanksgiving/My 1/2 Bday, I was in there on Thanksgiving and this year my 1/2 bday happened to be on Thanksgiving. So we decorated accordingly which confused a lot of the staff. But I think I have convinced about 10 people to start celebrating their 1/2 birthdays. ;) 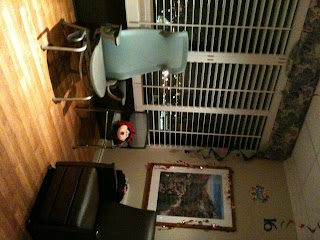 See Libby Lou on the chair she's my pillow pet that Canz and Mistie brought up to me... I brought her home and Lilly and her became fast BFFs, so much for Libby Lou being mine. Lilly carries her everywhere its so cute. 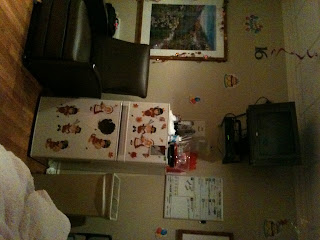 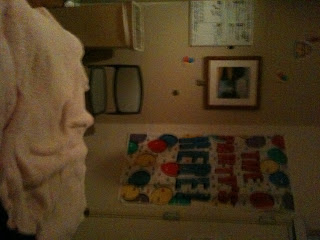 I had an AMAZING view, here are some pics of that. Look beyond the plantation blinds... it really was a nice room, marble sink, full fridge and freezer. 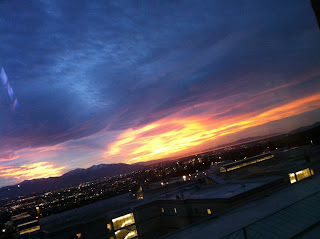 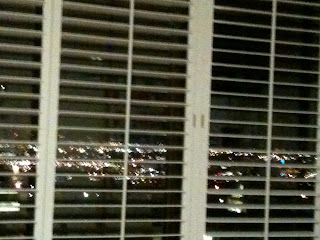 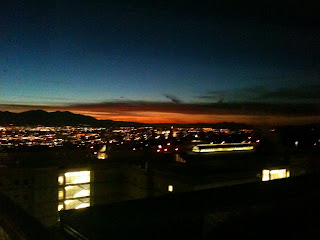 All of the staff was so wonderful and complied to all my crazy strict germ a phobe rules while I was in there. I did have some crazies in the room next door and even had a prisoner that was shackled to his bed. Yep, I was sleeping next to a inmate in there. He had 2 full time guards at one time and granted he was shackeled down, but it was a lil intense. Not very many people can say they spent the night a room away with from a prisoner.

Since I have been home I have been on house arrest. Our air has been the worst in the nation for the last 4 days. Its so thick you can taste it and you cant see very far in front of you. It was putting a damper on my view while I was in the joint. 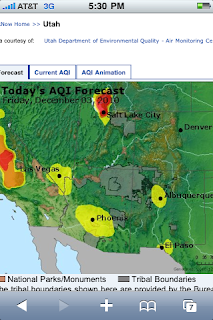 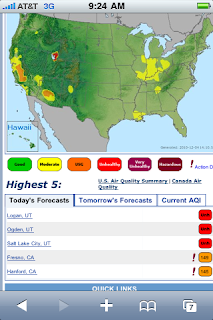 Yep the above shows we are the worst in the nation with California in second place
The air was a lil better today so I got out for a couple of hours but came back home to my O2. Last night my resting heart rate was 140. So I am taking it easy so that my stint in the joint can last me a long time.

I hope you all are enjoying the holiday hustle and bustle, be safe!! Xo
Posted by Somer Love at Monday, December 06, 2010 10 comments: