What I believe started it all..... 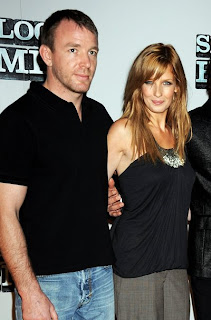 According to sources, Guy has already moved on from his Material Wife to actress Kelly Reilly, currently starring in the director’s adaptation of Sherlock Holmes. (To bad he thought the grass was greener, but I promise Mr Ritchie Kelly is NO Madge!!!)

In addition to reports that Madonna had been physically abusive and Guy had been verbally abusive, the magazine is also stating that three days after announcing their divorce, Ritchie sent his driver to his London home to pick up some belongings, then moved into the Chatham Hotel, where Reilly is staying.

Reilly, a relative unknown in the States, is likely to get a whole lot more exposure, whether she wants it or not. “Hand on heart, I find it a little bit embarrassing. I don’t need to be on the cover of magazines,” the actress once said. Looks like she’s about to get her start with the tabloids

Email ThisBlogThis!Share to TwitterShare to FacebookShare to Pinterest
Labels: Madonna

I never know what/who to believe in these circumstances... sad, really.

And you'll just hafta wait till Halloween to find out what we're gonna be!!! NOTHING as clever as yours!!!! That's so great!

Poor baby Lilly! You need to ask your doctor for some puppy sedatives too. I'll have to take a video of drugged up Shiner tonight b/c it is too funny! He drags his little paws when he walks and SNORES really loudly!

Yeah, there are always 2 sides to a story. I feel bad for the kids. I could care less about the parents. I'd say neither of them are angels. LOL.

Oh I can't wait for my tabloids to come tomorrow!!