I knew it too. Why I don't just skip that step and go right to scheduling surgery is beyond me. She has two new spots they are pretty close together and again I caught them early so they can be removed with one incision rather than two. They will only have to sedate her and use a block rather then put her all the way under, which is good since she doesn't do well with anesthesia.

It really just breaks my heart but I am catching them early and she is a fighter. Her doc said she can still have a long normal life which is what I needed to hear.

I did ask him why she kept getting these mast cell tumors and he said that it was genetic, and that she just has a defective gene that causes them. It was like a light bulb went off... I told him we knew lots about defective genes and told him she might just get that one from me ;) Then I told him she is a fighter and she will indeed kick cancer's butt!

She turns 6 on Mon so I will prob schedule it after that, no one should have to have surgery around their bday. 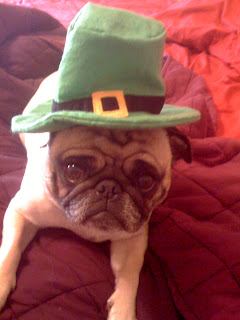 Email ThisBlogThis!Share to TwitterShare to FacebookShare to Pinterest
Labels: Lilly

You're such a good mama, Somer. The babies are so lucky to have you!

Peaceful things and lots of love.

Stupid defective genes! It's good she has a good mama like you to catch the cancer early. I hope her surgery goes good.

I'm sorry but your right she takes after her Momma she's a fighter!

Wishing a speedy recovery!! Your babies are precious :)

Poor Lills. :( So glad you caught it early. Keep us posted! LOVE her St Patty's hat!!

poor lils. sorry to hear. but happy you are so on top of it all.
best of luck!